I think the Spice Girls inspired me to become a developer

Looking up to other people’s works is a process that encompasses a mixture of admiration, wonderment, passion, and some frustration nonetheless. Inspiration comes in many ways and it is spread through uncountable different media, from music and poems to videos, apps, headlines, video games, photographs, and so forth. Inspiration is something so strong, and so rooted in one’s creative process, that it can permeate even the unconscious and act as a background collection of applied memories. My compilation of inspirations is a cluttered, complex set of images that range from Power Rangers to Gilles Deleuze – a recollection of things I have watched, read, discussed, reproduced, and listened to.

While inspirations can operate as backdrop agents, the ones we consciously remember and look up to are the Influencers. This term is so over used these days, but I mean the real influencers, whose actions, works, and life stories are a great source of encouragement and enthusiasm, whose professional paths are some type of guidance one would like to follow.

Art flourishes in the strangest grounds, and Rothko’s body of work is a great example of the power of images. Born in Russia in a Jewish family and fled to the USA while still a child due to religious persecution, Rothko faced in his childhood the perks of losing his father to cancer and being a refugee in a land he did not seem to adapt to easily. His underprivileged conditions were soon overpowered by his intellectual capacity – Rothko won a scholarship to study at the highly renowned Yale university. He dropped it a few years later and moved to New York, where he started his life as an artist.

Soon he would develop his own unique painting style, highly influenced by New York’s avant-garde environment he was now inserted in. Whereas extremely treasured by his own academic body, Rothko’s family “failed to see art as valid vocation during the depression”, facing him as a misunderstood bohemian whose work would have little to no value. By the 1940s he would already have established his own authorial practice, producing the big abstract rectangles of colour he would later become known for.

He was a revolutionary and always challenged the system. Rothko worked and painted for passion and love, even in hard times and even when his own misery was a major source of inspiration. I see his works as displays of emotions, albeit mostly pain and grief; they did not need to be delightful emotions after all hence being human would be enough. I have many favourite Rothko’s works, however, most of them cannot even be counted or named since he did not bother to give a title to many of his paintings, demonstrating a high level of unpretentiousness that has become the norm in contemporary art. Most of his works are an almost uniform canvas of complementary colours. They seem flat at first glance, but suddenly they display an enormous third dimension. Rothko proves there is actual depth in colours, making his canvases dialogue with light and perception instead of shapes or forms only.

There is a chapel named after him where fourteen almost flat black paintings are displayed – no walls, no icons, no symbols, only his light, and emotions. Rothko transposed the barrier of aesthetic criticism when it does not matter whether his painting skills are good or not – our only choice when looking at one of his canvases is defined by the act of feeling his intentions or not. Most abstract painters worked with this neglected interaction, where the medium is not interested in whether the observer can understand it or not. Rothko does a beautiful job in adding an emotional dimension on top of this alleged superiority of abstract art, though. It’s human, after all.

This artist has not impacted the art world in a meteoric way like Pollock or Kooning did, neither did he invent a whole new language for visual expression hence his subtle, gentle style. He operates by the borders instead. Rothko has touched the very margins of what an abstract work of art should be and became an everlasting source of inspiration to me for both his works of art and his life trajectory.

The Spice Girls on knowing your audience

They were 5 Girls engaged in what was probably the biggest commercial phonographic endeavour of the past century, and I was only 8 years old back then. I would never be in such position of denying the power that Spice Girls had as influencers in my life. Altogether with MTV and the massive spread of videographic culture in the late 1990s, this cultural phenomenon definitely took a big role in my decision to do something visual as my profession.

Even though nothing Spice Girls was doing was specifically new or groundbreaking, the band — or their producers — managed to create a new pop language through the recycling of many prosaic elements. Every word of the Spice Girls’ vocabulary explained ahead had been exhaustively used before their success, but their merit stands for being the ones to group all these characteristics together into a cohesive act.

The Spice Girls taught me some valuable lessons:

The psychological dimension of colours is a major exploration subject within the band’s repertoire. Colors are used to point to and define different personalities and moods, and one can quickly assimilate their specificities with few to no previous knowledge – from clothing to hair and makeup colours, a clear vocabulary is defined, from calm and soft to aggressive and explosive. Before them, a group band would wear a coherent set of clothing to express its integrants were part of a whole. The Spice Girls managed to maintain individuality and still be recognized as one.

The importance of associating specific colour tones to specific tasks or intentions is continuously growing, and great examples are found in the fundamentals of colour usage expressed both in Apple’s iOS Human Interface and Google’s Material Design guidelines. Blue seems the way to go when addressing social networks for instance, and red dominates the market when it comes to media consumption.

2: Image is a game changer

The Spice Girls would never release a single without a proper video. Again, no big news here – big industry names like Michael Jackson and Madonna had been doing it years before them. The question here is how much their moving images were a fundamental part of their cultural permeability. One would never hear the catchphrase “I’ll tell you what I want, what I really really want” without immediately projecting to mind that shot of Mel B’s groovy movements on a hallway. Their songs were extremely dependent of their videos, and one could not exist without the other, or would not have the same impact. This symbiotic relationship is now applied to every single domain of the media industry; every brand looks for unity, consistency, and indissolubility in their content.

They were the first band I can recall to introduce themselves as normal people. All that pop star god-like aura was suddenly gone; and there they were, wearing fast fashion clothes and cheap makeup to go up on a stage. I believe that great part of their success comes from being so relatable that the band established an immediate, straightforward speech to every child and teenager on the late 1990s. I see this approach as one of the most valuable techniques for getting people engaged in whatever project I am working on. You work should always speak directly to its target public no matter how cool or avant-garde one’s creative process may seem. The presence of engagement and interaction seem to be one fundamental aspect of creative media these days, and it can be a turning point to the success or failure of a project.

Vignelli on being misunderstood

I am obsessed with transit maps, they have such a power and presence, and I believe they are icons of what city life has turned out to be. I was born in the countryside of Rio de Janeiro’s state in Brazil, and I have found in the cities my biggest source of inspiration. Massimo and Lella Vignelli were Italian designers naturalized in New York whose body of work is a great influence for me by its magnitude, presence, and even contradictory attitude. Vignelli Associates is the name of their creative office, and they designed timeless brands that are icons of what modern design should be such as IBM and American Airlines. Then the firm exposed the dangers and chores of being a design team with what I believe to be their masterpiece: the New York subway map.

In the late 1960s, New York’s MTA was undergoing a deep transformation of its network, including several line extensions and the unification of three former separate heavy rail operators under one single administration. After some delayed negotiation, Vignelli’s office was hired to redesign the whole system map, and they decided to draw it from scratch.

Vignelli ditched everything New Yorkers knew about their transit system and looked beyond expectations, getting inspiration from the diagrammatic approaches already developed in Europe (especiallt the London Underground) by then. All the geographic reference was taken away so the whole system could fit harmoniously into one master map. 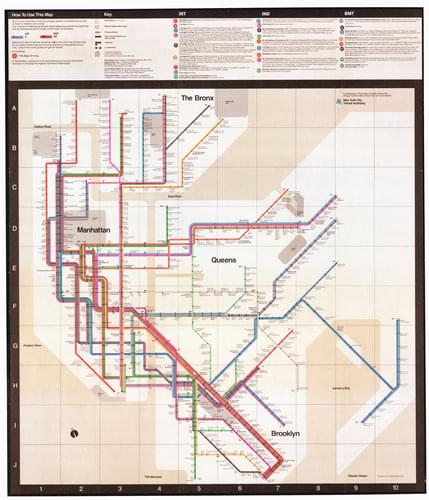 Vignelli’s subway map influences me by its clutter-free, straightforward approach. Information is so clearly displayed and so readable, the line work is so sharp, and everywhere appears in place. There is not a single piece of this map I would change myself. Vignelli’s map is one of the most beautifully designed pieces I have ever come by. The general public hated it, though. New Yorkers were so outraged by the fact that they didn’t seem to know their city anymore that public pressure made the MTA replace the map a few years after.

This is one of the biggest examples of a gap between the intentions of a designer and public reception. I can only imagine Vignelli’s frustration seeing years of his office’s hard work being discarded. The New York Times describes him as a “gifted designer expecting too much of the public”, and maybe this is exactly what happened. His work remained misunderstood for many years, however recent critics have elected the 1972’s subway map a reference for information design. Was Vignelli’s creation too advanced for its own era? Isn’t it exactly how we feel when clients seem to have a hard time understanding our intentions?